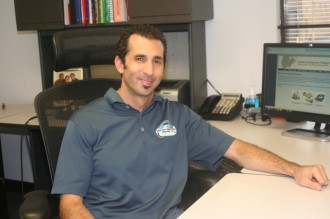 Santana Equipment Trading Company was created by a young International Marketing graduate from SIU named Eric Davidson. Fresh out of school, Eric was hired by the Flaska Brothers at Forklift Exchange, where he spent 4 years learning the basic trade. Eric then moved on to Atlas Lift Truck to expand his experience and expertise, where he was mentored by industry great Howard Bernstein for the next several years. In 1999, Eric became extremely hungry to start his own company. Due to his sustained success as a sales person, he knew he could succeed at building his own organization.

Eric started his business out of a townhouse in the northern suburbs of Chicago. It was a struggle at first, as he was a newlywed with a son on the way, but he was bound and determined to make it. During the process, he was learning all new phases of the business including finance, wholesale, retail, marketing, warehousing, and the International and Hispanic market. As time had progressed, Eric's company was growing about 20% a year. He then decided it was time to make the big move and look at purchasing an office with warehouse space to store his ever-growing inventory.

In 2002, Eric moved his operations to Vernon Hills, IL, and added 5 employees. With continued growth and expansion, the company then moved to Gurnee, IL in 2005 and began the retail side of the business. Five more employees were added at this time, and the company began selling used forklifts in the retail market. In the summer of 2012, after several more years of steady growth, the company opened its first satellite office and warehouse in Phoenix, Arizona. The Phoenix office expanded to a larger office and warehouse space in spring of 2016 to accomodate its rapid growth. Santana Equipment Trading Company is now 19 years strong, and plans to continue its growth and success for many years to come.

The Santana Equipment Trading Company, under Eric's leadership, has been strategically guided through many stormy times, but the company became stronger and stronger as it overcame each economic obstacle. Eric has positioned the company to expand throughout the United States over the next few years, and to build lasting relationships with current and future customers. Eric notes, "It has been the joy of my life along with my wife and 2 children who have grown with the company."